Prague is the most touristed city in Eastern Europe with good reason.  I was lucky enough to stay with Jeremy, my Aussie friend who I met in Ljubljana, at his apartment during his last few days in the city after finishing his English teaching certifcation course.  He and his roomates showed me around town from the 13 kr (50 cent) beers to the best photo ops to the megaclubs where the DJ actually dropped Can’t Touch This with no sense of irony (I think).  Despite the continual rainfall and cold coupled with my open-shoed bravery, we had a great time.

My first day I headed up to the castle on the hill, probably Kafka’s Castle seeing as he once lived a block away.  The coolest thing I found up there was the Old Royal Palace.  This was a seat of government 1000 years ago and the only wooden palace I’ve yet seen.  Pretty impressive and featured below along with the more modern looking garden surroundings.

The next day at the Kafka museum, which seemed at first pretty silly because it featured few interesting historical documents of Kafka’s, we found some cool stuff.  The exhibition focuses on Kafka’s life, his relationship with his overbearing father, his repeated noncommittment with women, and his general feelings of oppression.  It’s hard to describe in words his life and its relationship to his work, much of which was never completed; I know firsthand from college when I chose to build a project describing The Castle rather than write a paper on it.  And I must say that the Kafka Museum’s exhibit was of the same high quality as my project if not better (thanks to a bigger budget, right?).  Here are a few of the best photos we took there followed by a pic of the statue outside the museum I like to refer to as Swinging Dicks in a Pissing Contest.  The hips actually move back and forth while the hands move their extremities up and down.

Prague has great statues all over town appropriate to its slightly eerie post-Communist and Medieval styles.  The last pic below shows a few of these statues that line the Charles Bridge.  You can find a new statue every 10 meters or so if you manage to wade through the tourists.

We were able to duck a lot of the tourists at the Wallenstein Garden which is not to be missed by any photographer, music lover, or basically anybody who likes green.  Below is a shot of the garden wall which looks a bit like a drip sandcastle but when you look closely you can spot a few faces here and there.  We wandered a bit to find a concert in the garden, which is a real Beer Garden as they sell the stuff from nearby stands, as well as a peacock doing the same–wandering.

Prague gets even weirder with its modern edifices.  Along with Frank Ghery’s building, you can find a TV tower that looks like something from the Jetsons and upon further inspection, you’ll notice its covered in babys.  A local sculptor added them as a temporary exhibit and the townspeople liked them so much it became a permanent feature. 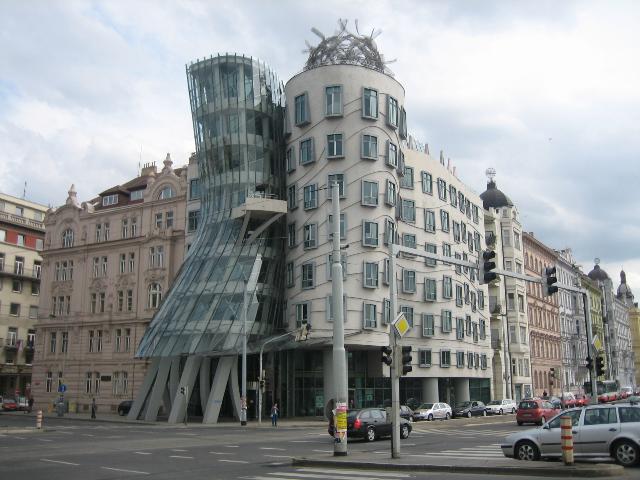 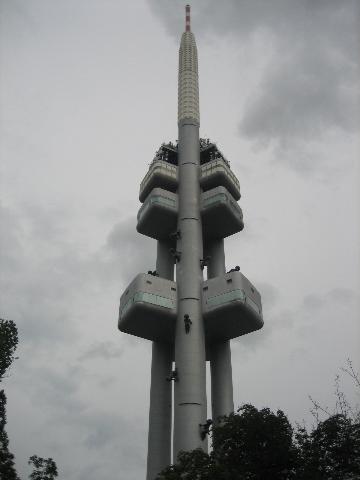 But the best macabre I saw was outside Prague in a town called Kutna Hora.  There is a crypt where the crazy, monk bone-artists put to shame the creator’s of Rome’s Cimatario Cappucini.  That last pic is a bit Pirates of the Carribean I think.

And of course, you can’t have fun in a weird town like Prague without constantly drinking cheap, cheap (and tasty), cheap beer.  Here is a shot of Budvar (also known as Budweiser and allowed to keep the name despite an international lawsuit from our friends back home in St. Louis) not to be outdone by champagne at Jeremy’s course completion party.

And with alcohol comes total capability and downright sexyness.  Or is it confidence?  I can never remember.  Here are a couple shots of such displays: Jeremy with a couple of Prague locals at a club and his roomate Celeste reaching Nirvana on the dance floor.

Next, Jeremy and I head to Krakow for the weekly weekend celebration.
Posted from Poland: