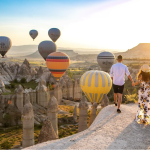 Flying from Istanbul easiest and fastest way to travel to Cappadocia. You can fly to Nevsehir or Kayseri airport, then take an airport transfer to your hotel. You have to remember Nevsehir airport is the closest airport to all the Cappadocia attractions but Kayseri is a bigger airport.

Istanbul to Cappadocia via Nevsehir

During the summer season, Turkish Airlines has roundtrip to Nevsehir from Istanbul, Antalya and Izmir every day. There are other domestic airlines you can fly depends on your travel dates. The flight from Istanbul to Nevsehir is only one hour 25 minutes. Nevsehir Airport ( or as known Cappadocia Airport ) where you will be landing is 30 km from city center. There is no bus service by the city from the airport, Turkish Airlines and Anadolu Jet have transportation for their customer for only 20 Turkish Lira. Pegasus which is one of the domestic airline does not have this service.

Istanbul to Cappadocia via Kayseri

From Istanbul, Antalya and Izmir Turkish Airlines, Onur Air, Pegasus, Sun Express, Atlas Jet, And Anadolu Jet can be chosen to fly to Kayseri. Between Istanbul and Kayseri you can find daily flights operated by Turkish Airlines, Onur Air, Pegasus. There is only Sun Express flights from Izmir to Kayseri.
Kayseri takes 52 minutes from Istanbul by air. Did you know you can fly from Europe and Northern Cyprus to Kayseri Airport? Such as an easy way to connect with the Cappadocia from Europe.

What is the cost?

The cost of the ticket changes based on the season, it can start from as low as 100 Turkish Liras up to 450 Turkish Liras.
For the Transfers from Kayseri or Nevsehir Airport, please check with your hotel if they provide transportation or chose a hotel that provides transportation.