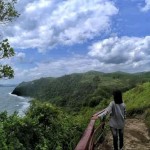 This island is the original habitat of Komodo dragons, a type of giant meat-eating lizards. On Komodo Island, there are more than 2,000 Komodo dragons that live in the wild. You can see the Komodo dragon which is targeting its prey in many locations in this place. It is very important to get around with a guide for safety reasons while here.

In 1986, UNESCO established the Komodo Island and other islands in the Komodo National Park as a world heritage site because of the existence of dragons that can only be found in this area. The habitat of these endangered animals is open nature with grasslands, white sandy beaches, and tropical rain forests.

Komodo Island won an award as the New Seven Wonders of Nature which is an award for the seven best natural attractions in the world. Determination of the winners obtained from the results of voting and research experts, the island of Komodo won the highest vote along with six other tourist attractions namely Iguazu Falls, Amazon Forest, Puerto Princesa Underground River, Halong Bay, Jeju Island, and Table Mountain.
komodo dragon

Komodo itself is a reptile species of giant meat-eating lizards whose length can reach 2-3 meters with a weight of 100-165 kg. This animal has the scientific name Varanus Komodoensis, while local residents call this animal by the name ‘Ora’. If seen, the Komodo dragon is scary, with a large body, sharp nails, scaly skin and has a forked tongue that always sticks out. The main prey for dragons is pigs, horses, deer, ferrets, buffaloes, and macaques.

A glimpse of the history of Komodo Island

In 1910, Lieutenant Steyn Van Hens Broek went to Komodo Island to prove the report of his troops that there were animals like dragons on the island. Broek along with his trained troops then decided to come to this island to hunt the animal. He and his troops managed to kill a Komodo dragon which was then photographed and sent to the Botanical Garden in Bogor.

1912 was the first year the existence of dragons was known to the public through a journal written by Peter A. Ouwens and published in a daily newspaper owned by the Dutch East Indies. Ouwens is the Director of the Zoology Museum in Bogor. Then in 1915, the Dutch government began to ban the hunting of dragons for fear that these animals would become extinct.

What can be done on Komodo Island?

In addition to seeing the life of dragons in their natural habitat, there are many other things you can do on Komodo Island:

Komodo Island does not only contain Komodo dragons, besides dragons, but there are also many other animals that inhabit this island such as horses, deer, various species of birds, snakes, monitor lizards and many more. One way to enjoy this island is by trekking. You can see these animals while trekking on Komodo Island.

When trekking, you will be invited to climb Mount Ara which has a height of 538 meters above sea level. You will also pass the Water Hole which is a place to drink and rest the dragons. You can see the dragons that are drinking or taking shelter under the surrounding trees.

There are four trekking routes that you can choose from short, medium, long to adventure. The length of this trekking path is 1 – 8 km depending on the type you choose. If you choose long and adventure, you will be invited to pass through forests, rivers and beautiful hills. As for the short, the journey will end on the hills with an awesome view of the bay. However, the four trekking paths will pass through the Water Hole so you don’t need to be confused choosing which path.

Komodo Island does not only offer natural beauty on land. Underwater world on this island is no less beautiful. There are around 386 types of coral reefs, 70 types of sponges, seaweed as a home for thousands of species of fish, green turtles, whales, sharks, dolphins and others.

The underwater world of Komodo Island and the Komodo National Park area are said to be one of the best diving locations in the world. When diving or snorkeling here, you can witness the beauty of marine life which is very rich and varied. Of the many dive spots available, here are the three best dive spots on Komodo Island according to many divers:

Samsia Stone is a favorite diving spot. You can walk through a series of waterways and can interact with turtles, sharks and various other small fish.

Toko Toko is called a stone palace in water. Located at a depth of 7 meters below sea level, you can enjoy the beauty of coral reefs with various colors and fish that swim between the reefs.

This point is also a favorite of divers. Located at a depth of 5 meters, you can find fish frogs, Barramundi Cod, Parrotfish and several other fish species.

The best time to dive in these waters is in March – December. This is because the wind direction, water temperature, strong currents and seasons that affect visibility when diving are good in those months.