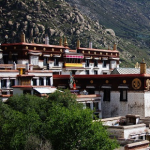 Our daily lives are filled with hustle, bustle, and worldliness. To flee from the annoying life in modern cities, Tibet is your sanctuary. Having a Tibetan vacation, you can renew, refresh and purify your body and mind by admiring the snow-capped mountains, turquoise lakes, sacred monasteries, and devoted Tibetans.

Tibet located on a massive plateau and owns countless natural and cultural sites. To have a Tibetan vacation, you can’t miss the must-see sites is the Tibet temple.

While some stories depict Buddhism in Tibet before this period, the religion was formally introduced to Tibet during the Tibetan Empire (7th-9th century CE).  Tibetan Buddhism has a long history. If you want to know the true Tibet, you must learn the Tibetan Buddhism. The Tibet temple is the best place to understand the Tibet.

Among the many Tibetan temples, I recommended the three temples I have been to.

Jokhang Temple is located at Barkhor Square in Lhasa, and It is known to that it’s recognized as the holiest temple in Tibet.

The first floor of the Buddha hall was built in Tang Dynasty, you can find bricks, carvings, frames, and columns which was made during the 7th century. This temple houses a precious statue of Sakyamuni at the age of 12, which is recognized as the holiest item in Tibet. This holy statue was brought by Princess Wencheng from the Tang Dynasty, and no it’s enshrined in the main hall of Jokhang Temple.

The most attractive feature of Jokhang Temple is its golden roof. For photographers, the best time to shoot this temple is in the morning, when the golden roof will shine under sunlight.

Stands in the western suburb of Lhasa, Drepung Monastery is the largest monastery in Tibet. Along with “Sera Monastery” and “Ganden Monastery”, they are also famous as the “three greatest Gelug monasteries of Tibet”.

This large monastery covers an area of about 200,000 square meters and houses 10,000 monks during its peak period. It was built in 1416, and plays a role as not only a monastery but also a college.

During Shoton Festival, which will be celebrated on July 1st of the Tibetan calendar, thousands of people come to Drepung Monastery to worship a giant thangka of Buddha. It’s also the best time for travelers to visit Drepung Monastery.

Sera Monastery is a famous monastery located in the northern suburb of Lhasa. Its name, “Sera”, means “wild rose” in Tibetan literally. The legend goes that when this monastery was built, wild roses were blooming on the hill behind it. Also been founded by Jamchen Chojey, it’s another famous Gelug monastery and houses precious collection of relics. In this monastery, you can enjoy sutras, Thangkas, paintings, and statues.

Sera Monastery is also famous for Buddhism debate. You’re suggested to visit it in the afternoon from Monday to Friday since monks in traditional red robes will debate about Buddhism in the courtyard during that period. Don’t miss it.